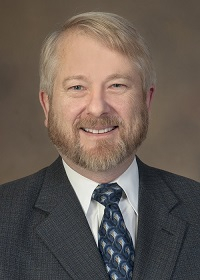 Daniel Derksen, MD, associate vice president for health equity, outreach and interprofessional activities at the University of Arizona Health Sciences, has been selected for the 2018 Leonard M. Napolitano, PhD, Award by the University of New Mexico School of Medicine’s Alumni Association. He will receive the award Oct. 27 at the UMN School of Medicine Alumni Reunion Awards Banquet at the Sandia Event Center in Albuquerque.

Dr. Derksen also is the Walter H. Pearce Endowed Chair, professor of public health policy and management and director of the Arizona Center for Rural Health at the UA Mel and Enid Zuckerman College of Public Health. He holds a joint appointment as professor in the Department of Family and Community Medicine at the UA College of Medicine – Tucson.

The award, named after the UNM medical school’s third dean, recognizes alumni who, like Napolitano, have shown innovation and commitment to medical education at UNM and in New Mexico. Dr. Napolitano, who served as dean from 1972 to 1994, advocated for the health of New Mexicans through his dedication to medical education and clinical care, while building strong public and private partnerships. Dr. Napolitano’s numerous contributions and his value of knowing patients as people led to the development of the school’s nationally recognized primary care curriculum. (His daughter, Janet Napolitano, served as governor of Arizona from 2003 to 2009 and as Secretary of Homeland Security from 2009 to 2013, and became president of the University of California in 2013.)

“Having known Dr. Napolitano when I was a resident and then as a faculty physician during my time at UNM, I’m honored to receive the Leonard M. Napolitano, PhD, Award,” Dr. Derksen says. “Len was passionate and deeply involved in all aspects of the School of Medicine, including informing state health policy at the New Mexico Legislature. He was a great role model for sustained commitment to health professions education and service over his decades of leadership.”

Dr. Derksen has spent his career as a champion of health-care access, coverage, workforce development, outcomes and policy, both locally and nationally.

After receiving his medical degree from the UA College of Medicine in 1984, he completed an internship in internal medicine in 1985 at St. Joseph’s Hospital in Phoenix and a residency in family medicine in 1987 at UNM, where he remained as a faculty member for 25 years.

During that time, Dr. Derksen completed a Robert Wood Johnson Health Policy Fellowship in 2008 with then-U.S. New Mexico Sen. Jeff Bingaman. He researched and drafted federal legislative provisions to improve the nation’s supply and distribution of the health workforce that were included in Title V of the Patient Protection and Affordable Health Care Act.

Dr. Derksen joined the UA Mel and Enid Zuckerman College of Public Health in 2012, where he has been working to improve the health of Arizonans, with a focus on the state’s rural and vulnerable populations.

In 2015, he provided testimony before the U.S. House of Representatives, Committee on Ways and Means, Subcommittee on Health, on the subject of rural health care disparities created by Medicare regulations and payment.

In August 2018, he was appointed associate vice president for health equity, outreach and interprofessional activities at the UA Health Sciences. In his new role, Dr. Derksen will collaborate across the five UA Health Sciences colleges, UA main campus, and with stakeholders and partners statewide to build on interprofessional activities that promote health equity – including social, economic, demographic and geographic factors that affect health outcomes.